DownDuro, PedalPark, Super Enduro – there are many terms for this category, but these bikes have one thing in common: they put a big grin on your face when you go downhill!

Matthias Reichmann, founder and owner of Reichmann Engineering or RCMN for short, is known for his legendary downhill frame “RIP”. Now the RIP gets a little brother in the form of a long travel enduro bike. The bike should not be inferior to the RIP in its downhill qualities, but can be comfortably pedaled uphill. The key points were put on paper relatively quickly: A lot of reach, flat head angle, steep seat angle and of course a kinematics that is unparalleled.

The frame adopts some key points of its big brother RIP IV. The kinematics were completely redeveloped on the basis of an experiment a few years ago. The main frame is a completely new development that leaves nothing to be desired and is oriented towards the wishes of a modern enduro rider. And by Enduro we don’t mean the leisurely after-work ride, but the hunt for the last second in the downhill.

The interaction of three levers ensures the perfect rear function. Thanks to different front shock mounts, a 29″ or 27.5″ rear wheel, a 250 mm or 230 mm long shock can be used without changing the geometry.

The SENDuro frame has a rear triangle with seven links. A modified watt linkage* connects the two upper links with each other. This system has the characteristic that the rear end rotates around a virtual point. This pivot point changes its position over the course of the travel, allowing individual parameters of the kinematics to be very finely tuned. The main focus here is on the creation of a perfect progression curve and at the same time a sporty chassis that is pleasant to pedal uphill. The pivot point shifts slowly at first, which ensures a constant increase in progression in the mid-travel range. At the end of the travel a very strong shift of the pivot point takes place, which results in a strongly increasing progression. The modified watt linkage creates an S-shaped movement, so the system has the advantages of a DW link in the first half of the travel and the advantages of a VPP system in the second half.

*A watt linkage converts a rotary motion into a linear motion. This technology was originally invented by James Watt, the inventor of the steam engine. By modifying the Watt linkage, the kinematics can be adapted very specifically.

The geometry reflects a modern enduro bike. A long reach combined with a steep seat and flat head angle make the bike very smooth and fast.

The leverage ratio is divided into three sections: The travel starts with a steep curve that flattens out after SAG before progression increases sharply over the last 15mm of travel. Practically this is noticeable by very sensitive response in the first third of the travel, support and control in the second third and lots of end progression at the end of the travel.

The upper link can be mounted in three positions and thus allows a change of the end progression. This allows the bike to be optimally adjusted to different shocks and requirements.

Perfect conditions for a steel or air damper and an uncompromising riding style.

The Anti Squat counteracts the inertia caused by acceleration and thus a bobbing of the damper during pedaling.

With the SENDuro, the Anti Squat in the SAG range is around 125%. This means that the shock is slightly pulled apart when pedaling and gives the bike a sporty, supporting character during sprints or pedaling passages and prevents the shock from bobbing due to pedaling movements.

Towards the end of the travel, the Anti Squat decreases rapidly. This allows a fine response of the suspension in the last part of the travel despite the high progression in this area and at the same time counteracts a high pedal kickback during strong compressions.

The frame can be preordered in limit quantity now: 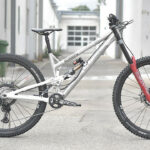 SENDuro Frame Preorder
Finally the time has come: The preorder for the SENDuro frame can begin. Production is already in full swing. The CNC parts are ready and the production of the main frames and rear ends will follow in the next weeks. The delivery of the frames to you will take place at the end of January. The number of pieces of the first production is limited to 12.