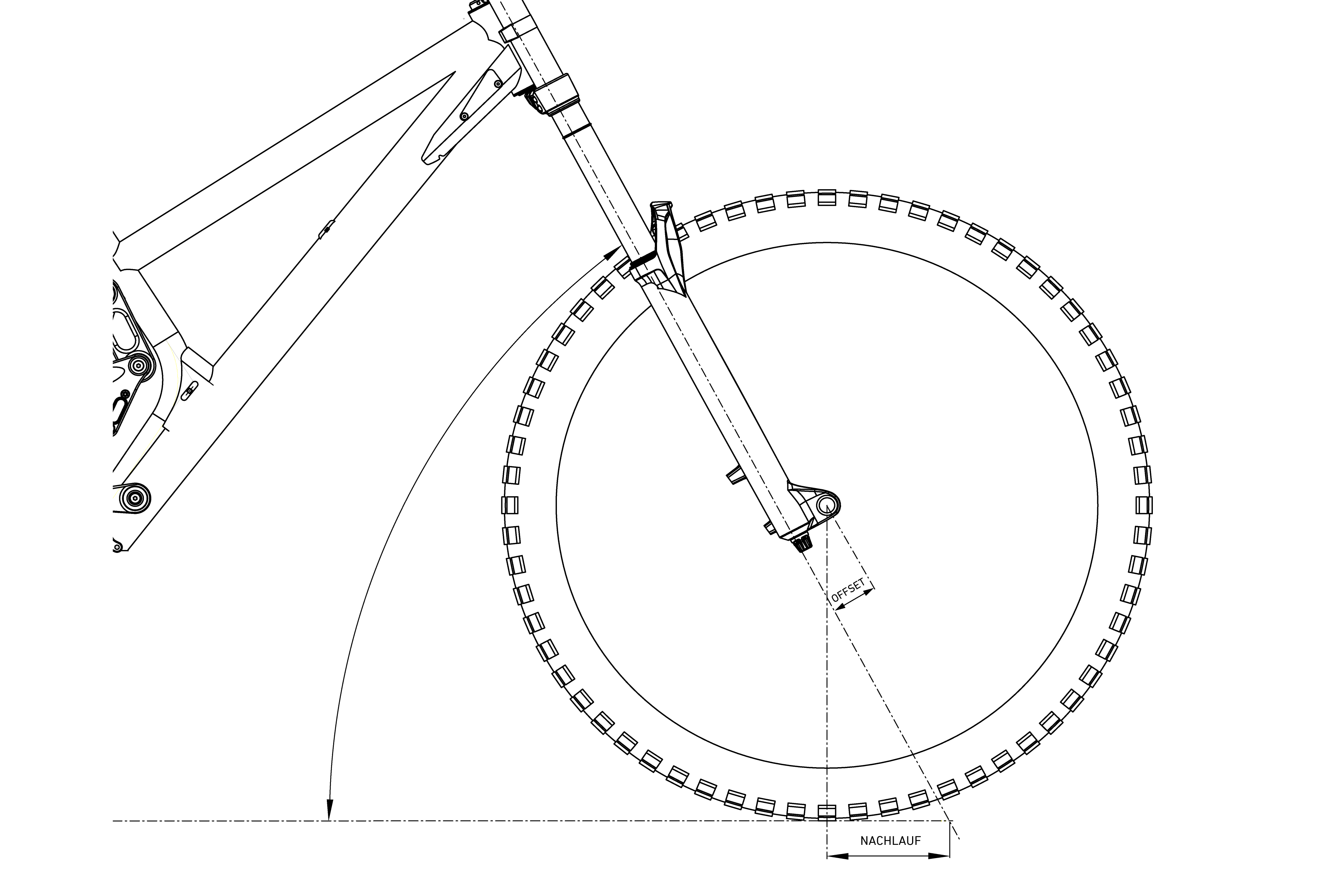 Matthias Reichmann, inventor and developer of the Virtual Pivot Headset explains the physical background of the steering geometry:

Stability on the single track vehicle

Why doesn’t the bicycle or motorcycle tip over? Because someone is sitting on it and keeping the balance? Yes and no – because above a certain speed, single-track vehicles can just keep going themselves. But not perfectly straight, they “lurch”. And exactly this lurching is the mechanism that stabilizes this actually unstable system. But now we go back several steps – I try to keep the explanation short and understandable.

Our wheels have a so-called “mass moment of inertia”, which depends on the radius and mass. The gyroscopic forces result from the mass moment of inertia. We experience these when we take an wheel and let it rotate. If we tilt it counterclockwise from vertical, it will turn in to the left (and clockwise to the right). In other words, if we are riding a bicycle and we tilt to the left, our steering will turn in, we will make a turn. From the turn we get a centripetal acceleration at the center of gravity of the whole system, multiplied by the mass we get the centrifugal force, multiplied by the center of gravity height we get a moment. This moment restores our bicycle. According to Mr. Isaac Newton, however, we are an inert body that simply behaves inertly without the influence of a force from outside – in other words: it tilts to the other side. Here the game starts all over again, via the gyroscopic forces of the tilting front wheel, it steers in again, drives a curve and sets itself up again accordingly. Our unstable system thus stabilizes itself by permanently driving curves – it lurches.

How much it tilts, how large the curve radius is, and at what frequency it lurches depends on a variety of parameters:

If we want to actively influence our stability, the easiest way is to vary the trail. Here we will now explicitly deal with the value of the offset. We shorten the trail via a longer offset. The trail is the lever arm of the reset torque of the front wheel. By shortening the trail (=longer offset), our steering becomes more reactive, more agile, and in extreme cases possibly even more nervous. However, this plus in agility makes the steering react faster to a tipping of the bike – the lurching is reduced, the bike stabilizes faster. In other words, the amplitude of the lurch decreases, the frequency of the lurch increases. This results in an apparent paradox: more agile/nervous steering leads to more stable behavior of the bike as a whole.

In the other direction, shortening the offset results in a lengthening of the trail, which leads to a “stiffer” and less reactive steering, causing the wheel to tip further before it sets up again.

There is no “better” or “worse” here. The bike’s behavior simply has to suit the rider.

In principle, however, we cherish the basic recommendation:

An adjustment of the offset is quite noticeable for experienced riders. A modern DH bike has a trail of approx. 130 to 140 mm – a difference of 8 mm corresponds to about 6%. Incidentally, the same trail change also results from a 1° change in the steering angle – experienced riders definitely feel this. However, due to the diversity of the parameters of the overall system, it makes no sense here to calculate the perfect value in concrete terms – you have to “feel” it. And our VPH system is perfect for this – simply change the offset in a few minutes and try it out instead of buying a new fork.

If you want to dive deeper into this topic, I recommend the following link: